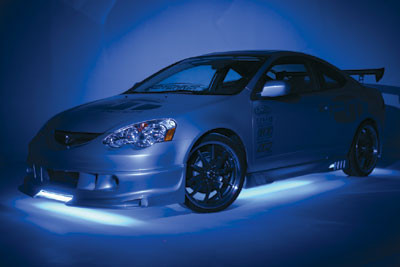 Lighting can set your Car apart from all others. A small touch that can go a long way and it can be put almost any where. Sounds and Motion Car Audio technicians can make sure that the job is done right the first time and your car will get the lighting you want the first time. So whether you want to illumante the streets with an underbody light or accent the interior by led framing, come in and get yours today!

What is the difference between HID and LED lighting? 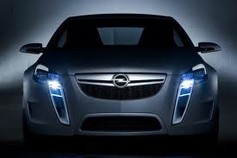 High Intensity Discharge (HID) lighting replaces the filament of a light bulb with a capsule of gas.. The amount of light produced is greater than a standard halogen bulb while consuming less power; this light more closely approximates the color temperature of natural daylight.

HID bulbs produce 5 percent of their output when first ignited, requiring a few seconds (usually 15-20) to reach full output. Also, if power to the lamp is lost or turned off, the arc tube must cool before the arc can be re-struck and light produced. Halcyon HID lights require approximately 5-10 seconds before they can be re-lit.

Light-Emitting Diodes (LED) are light sources utilizing diodes that emit light when connected in a circuit. The LEDlight is housed in a plastic bulb, which concentrates the light source.

The most important part of an LED is the semi-conductor chip located in the center of the light source.

LEDs don’t have a filament to burn out or break; therefore, they last much longer than conventional bulbs. Given that a very small semiconductor chip runs an LED, they are very durable and tend to last many thousands of hours. Moreover, LEDs are “instant on,” much like halogen lamps, and thus convenient for use in applications that are subject to frequent or potential on-off cycling. Conversely, HID lamps are more fragile and have to warm up (15 – 25 seconds) during ignition. However, HID lights are much brighter than current LED configurations. This is because the side-emitting light found with HIDs is much easier to focus; the front-emitting nature of LEDs does not lend itself to a tightly focused beam. HID lighting is still preferred by most divers given the superior intensity and tight focus. However, LED technology is changing rapidly and it is foreseeable that LEDs will eventually surpass the performance of HID lighting.

Where to find us:

Call us to make an appointment or use our appointment calendar on here! We're looking forward to hearing from you!

Recommend this page on: